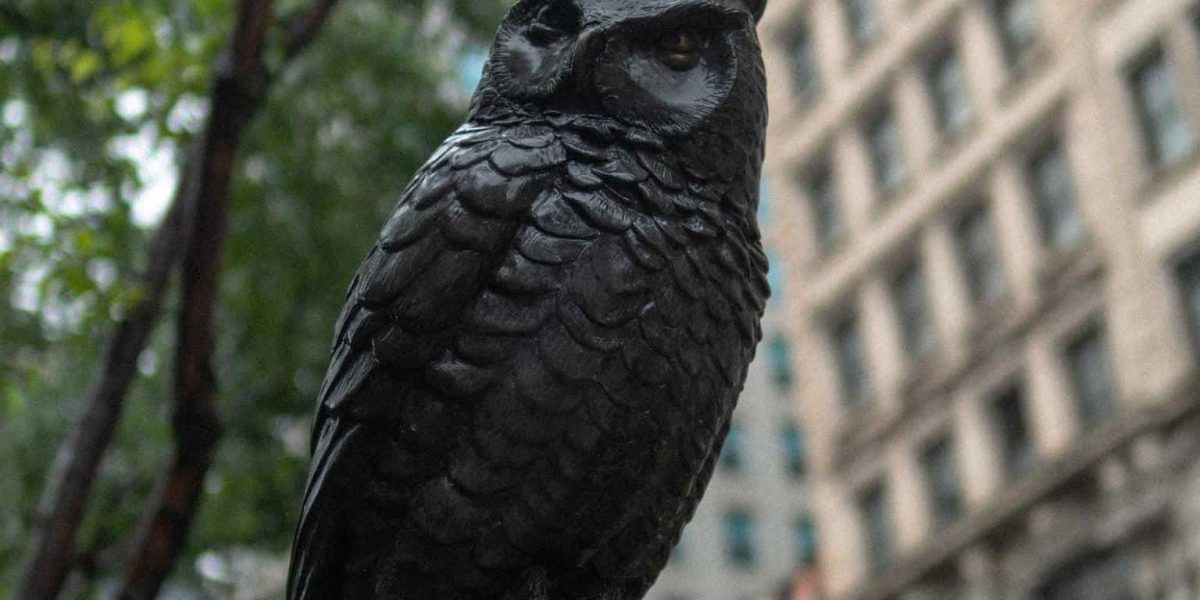 In New York, there are eight different species of owl that can be seen.

The most common of these owls is the Great Horned Owl.

New York is a busy state with two different climates, most of the state has a subtropical climate whilst the north of the state begins its transition into a humid continental climate.

There are a very large number of state parks in New York totalling 215.

There are 22 different national parks in New York state, ten of which are in New York City.

After briefly looking at the state of New York, let’s have a look at the owls which reside there in more detail.

What Owls can be seen in New York?

These owls are medium in size and their bellies and face are covered in white feathers whilst their back and wings are a shade of pale brown.

They are almost completely nocturnal and have a wide range that encompasses 48 of the states and they can most commonly be seen in their grassland habitats.

That being said, they have been observed nesting successfully in large empty buildings.

Barn owls will usually mate for life and they will remain monogamous to their partner during the breeding season.

However, there have been observed instances of males mating with more than one female.

Males will court females using a display flight that involves what is called a “moth flight” which is where they will hover in flight in front of a female.

New York is one of the 48 states in which this owl is a permanent resident and can be seen in all regions of the state.

The most sightings of this bird have been recorded in the south west of the state with very few sightings occurring in the northern areas of the state.

The Eastern-Screech Owl is small for an owl and its impressive combination of grey feathers allow it to camouflage well against a variety of trees.

It is sometimes known as the Little Screech Owl and they are most commonly found in dense forests, the main requirement for them is that they have sufficient tree cover.

Without sufficient cover these animals will not survive which is why they are common users of nest boxes.

These owls are most active during the night but will also hunt at dawn and dusk if necessary.

Both the males and females look after their young and most Eastern-Screech owls will only mate with one female, though some will mate with a select two.

Males spend their time defending their territory and hunt by only making short flights from one observatory perch to another.

Given their eastern range, this owl can be seen throughout New York and is a year-round resident of the state.

These birds are most active during their breeding seasons and most of the recorded sightings of this owl have been in the western half of the state.

These owls have large ear tufts which is where they get their name, they do not actually have horns and it would be very surprising if they did.

Their face is usually brown in colour whilst their bodies are covered in mostly grey feathers.

These owls can be found across almost all of north America and are most often seen in woodland areas.

However, they have been observed nesting successfully in urban areas and cities.

Great Horned Owls mate monogamously and both individuals from the breeding pair will defend their territory with a series of hooting noises.

They have been known to get into fights with intruders that are not deterred by their hooting and have even been recorded killing members of their own species.

Different bird species will often harass these owls in an attempt to get them to leave their nest and their eggs unprotected.

As the most abundant and widely spread species of owl on this list it is no surprise that the Great Horned Owl is a permanent resident of New York state and can be seen throughout all of the state’s regions.

They are most active during their breeding seasons and the recorded sightings of this bird appear to be evenly distributed throughout the regions of New York.

Their backs and wings are covered in brown feathers and their underbellies are pale in colour.

These birds have a very large range and will almost always nest in dense forests, they seem to prefer staying in mature forests if they are able to.

It is most important for them to nest in denser areas of forest during their breeding seasons.  The monogamy of this owl can depend on prey abundance.

These breeding pairs are not long lasting as they will mate with new individuals in each subsequent breeding season.

These birds are most commonly found in New York outside of their breeding seasons, but some will stay in the state year-round.

They can be seen in all regions of the state with the highest number of recorded sightings being in the south east of the state.

Unlike the Long-Eared Owl, this owl has incredibly small ears that cannot be seen as they have no ear tufts at all.

These owls are medium in size and have brown feather spotted with buff that cover all of their bodies.

You are most likely to see these owls in large open areas of grasslands with little cover.

They are most active during the breeding season and have been recorded to be active at all hours of the day and night.

The male’s primary role after mating is to protect the female whilst she incubates the eggs.

They will do this by performing distraction displays to intruding individuals to deter them away from their nesting site.

Some of these birds take up permanent residence in New York whilst others only come to the state during the winter months.

They can be seen in all regions and are most commonly sighted in the western half of the state.

The Snowy Owl, as you may expect, is covered in completely white feathers that works as highly effective camouflage against snow.

As these birds often like to sit on the ground before a hunt, they are most often found in open areas of land such as the tundra.

Despite appearing to do a great deal of sitting, these owls are not lazy. They have very complex courting displays which involve dive flights, as well as gifting the female with a prey item such as a lemming.

They are very territorial and have aggressive displays that they will perform to other owls that stray too far into their territory.

There have also been recorded incidents of Snowy Owls dive bomb attacking humans that they have perceived as threats.

These birds rarely come into the United States but will sometimes go to northern states, such as New York, during the winter months.

Most of the recorded sightings of this owl are in the northern half of the state with very few being recorded in the eastern regions of New York.

It is not surprising that these owls get their name from their long, pointed ear tufts.

These ear tufts look very similar to that of the Great Horned owl. Long-eared owls are medium sized owls have orange faces and dark feathered bodies.

The habitat of this owl varies, they can be found in both open grasslands and coniferous woodlands.

These birds have been known to form loosely structured colonies and outside of the breeding seasons the size of this colony will increase, sometimes reaching a number of 100 individuals.

During the breeding seasons these colonies will stay close and roost within 50ft of one another.

These birds can be seen in New York throughout the year but lots of these owls only come into the state during their breeding seasons.

They can be seen throughout all regions of New York with most of the recorded sightings being in the northern areas of the state.

The Barred Owl is so named because of the bar patterned feathers that cover its body.

These bars are usually brown and white in colour. You can find these animals nesting in various woodland areas close to bodies of water.

These areas can range from swamps to coastlines. Barred Owls hunt during the night and will roost in the daytime.

Whilst smaller birds, such as woodpeckers, see these owls as predators, Barred Owls are common prey for a variety of species including the aforementioned Great Horned Owl.

These owls are most commonly seen in the eastern states and they can be seen in all regions of New York state. They are year-round residents of New York and are most active during their breeding seasons.

Most of the recorded sightings of this bird are in the eastern half of the state.