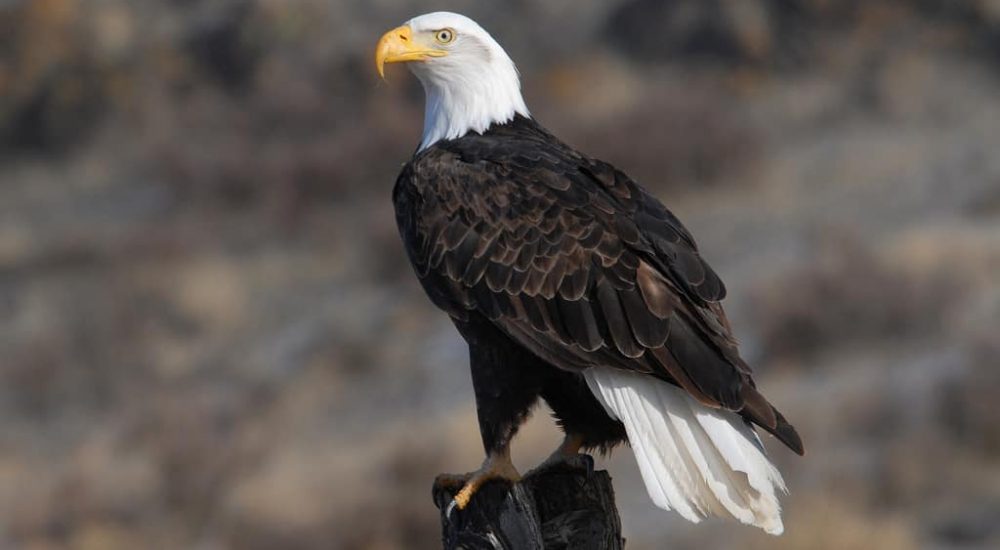 There are only two types of eagles that you would be able to see in Alaska, they are the Golden Eagle and the Bald Eagle. In fact, Bald Eagles have a denser population in Alaska than they do in any other state in America.

There is estimated to be about 30,000 of these birds in Alaska. Despite this, the Bald Eagle is not actually the state animal of Alaska, that title belongs to the moose.

Alaska’s climate differs throughout the state. The southern three quarters of the state is classified as being in a temperate zone and having a continental climate.

The most northern quarter of the state is in the arctic circle and has a subarctic climate.

There are 120 state park units in Alaska with 8 of these being national parks. One of the most popular state parks for eagle enthusiasts is Anchorage Coastal Wildlife Refuge.

This refuge is a favourite among bird watchers as it is used as a temporary home to many migratory species of birds.

Now that we’ve talked about Alaska itself and the eagles that can be seen there, let’s have a look at these species of eagles more in depth and take a look at when and where you are likely to see them.

Take a look at this article on how to attract birds of prey to your yard!

What Eagles can be seen in Alaska? Golden Eagles are one of the largest birds of prey found in North America. They are covered with brown feathers and have golden feathers covering its neck and the back of its head.

These birds habituate in large areas of open country, making their nests in cliffsides where possible.

Golden Eagles also have a dramatic courtship display which has been referred to as “sky-dancing”, this display involves various swoops and dives before objects are included.

Things such as stones and sticks will be carried to a great height before they are dropped and retrieved for the other individual.

It has been against the law to harm these birds or disturb their nests since 1962 when it was outlawed by the U.S. Bald and Golden Eagle Protection Act.

Whilst these birds are not quite as common as Bald Eagles, you still have a good chance of seeing one in Alaska.

They are found mainly in the northern regions of the state and are very rarely, if at all, seen in the southern east of Alaska.

You are most likely to spot one of these eagles in the open country, perhaps in barren mountain regions or in prairie and arctic tundra.

The weather can also affect your chances of seeing a Golden Eagle, the best days to go bird watching are on cool and dry days as you are much more likely to see them flying in these conditions compared to a wet and warm day.

Since Golden Eagles do not always migrate, it is possible to see them in Alaska year-round but your best chance of spotting one is in the summer months.

The highest abundance of these eagles in Alaska is from march to October, before small populations will migrate south out of the state when food is in decline for the winter.

Their courtship displays do not have set months but if you are hoping to see one they have been observed mostly in March. Bald Eagles are beautiful birds that are highly valued for their contribution to the ecosystem.

As well as a national emblem for America, these birds have also been a symbol of spirituality for Native Americans for far longer. Bald eagles are, unlike the name suggests, not actually bald.

They have a full head of white feathers whilst the rest of its body is covered with deep brown coloured feathers.

They are different from other birds in that they do not often hunt for themselves, but in fact feed on prey that other predators have caught. Bald Eagles have been known to snatch prey directly out of other bird’s talons.

As well as their unique hunting style, these birds are also recognised for their drastic courtship displays.

A male and a female will fly high in the sky, lock talons and then cartwheel towards the earth. It is a beautiful and tense display with the eagles only breaking apart to avoid hitting the ground.

The best place to try and see a Bald Eagle in Alaska is to the south of the state. Particularly in the southern east. This is because there will almost always be a high abundance of these birds.

In the winter months birds will migrate there from the north of the state and in the summer months Bald Eagles that have migrated south will return to the south of the state.

One of the favoured places in the southeast to spot Bald Eagles is in Chillkat Valley. There is said to be up to 3000 birds that nest in Chillkat Valley, mostly along the valley’s riverbanks and in old growth timber.

Whilst it is possible to see a Bald Eagle in Alaska year-round, there are preferred times for bird watching.

The best months are in late fall and early winter, this is because a lot of dead and spawned-out salmon will be available in the rivers.