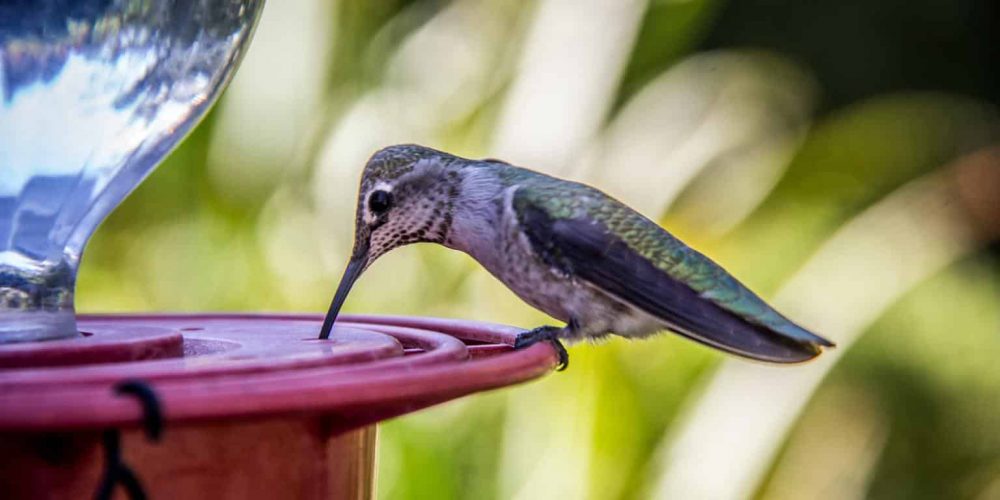 There are 7 different hummingbird species that can be found throughout Oregon.

This north-western state is one with varied climates across its regions.

The most commonly classified climate in Oregon is continental, meaning that the state has distinct seasons.

With one of the most popular system of parks in America, Oregon has 256 different state parks and 1 national park with 5 other national park sites.

These parks are very popular for birds, but so are the gardens of residents for hummingbirds.

Anna’s hummingbirds are the most common Hummingbird seen throughout the year in Oregon.

Now, let’s have a look at these individual hummingbird species in more detail.

What Hummingbirds can be seen in Oregon? The males of this species are the ones with the darker necks, the name comes from their chin that is covered in black and violet feathers.

Both sexes of this species have pale white or grey underbellies.

Despite there being little known information about this bird, they have most commonly been found in habitats close to river areas.

There is no confirmation as to whether these birds are monogamous, but they do not appear to be.

It is known that the males performing courting displays that involve dives of up to 100ft.

They have also been observed finding a high perch to survey their territory after they have spent time feeding.

These birds are not often permanent residents in Oregon and often come to the state during their breeding seasons.

This is also when they are most active and most likely to be seen.

Most of the recorded sightings of this bird have been in the northeastern regions of Oregon, with very few sightings along the western border of the state. These hummingbirds have feathers of mostly green and grey colours.

You can identify the males by their bright green and purple feathers that can be seen on their necks and plumages.

These hummingbirds are frequent garden visitors and they have commonly been sighted in a variety of sub-urban habitat areas.

Males have a courting display which involves performing large swooping dives and dances.

They will also sometimes perform a song whilst doing these displays.

These birds are not monogamous and do not stay in breeding pairs, the females raise their young alone.

Anna’s Hummingbirds are one of the most commonly found hummingbird species as they are year-round residents in the state of Oregon.

They become more active during their breeding seasons and they have most commonly been sighted along the western border. Their range very rarely extends to the east of Oregon. The males are unique due to the bright purple feathers on their head and face.

The rest of their bodies are mostly covered in duller and paler feathers, the same goes for the females.

You are most likely to see these birds in open areas, particularly those close to desert habitats.

They will pick a couple of large perches in their territory from which they will call out to defend it, they spend most of their time on these perches during the breeding season.

Males have a strict courtship display which involves a series of aerial dives, they perfect this display and then do not change it.

These displays usually last for an average of about 30-40 seconds however, they have been observed performing for as long as 4 minutes.

Breeding pairs do not stay together, they will usually mate with multiple individuals and the females will be the one to take care of the young.

These beautiful birds are very rare in the state of Oregon and can only be seen in the months of their breeding seasons.

You will most likely see one of these birds in the southwest of the state and placing sugar-water feeders and tubular plants in your garden may increase your chances of seeing one of them. These hummingbirds get their names from their broadly shaped tail feathers.

The males of this species are not monogamous and will not form breeding pairs or help the females raise the young.

They will perform dramatic courtship displays for any females that enter their territory.

Broad-tailed hummingbirds have the ability to go into torpor when it is cold and they cannot find enough food, it is a miniature hibernation where they slow their heart rate to conserve energy.

Like many other hummingbirds found in Oregon, you can only see the Broad-tailed hummingbird in the state during its breeding seasons.

There are quite abundant sightings of this bird however and they have most frequently been recorded in the southeast of the state. But they have been known to travel up the northwest as well.

Like lots of other hummingbirds, the females of this species have mostly dull green and brown feathers.

However, the males are known for their autumn colours of striking oranges and browns.

These birds are migratory and are usually seen flying above open areas of land during their migratory periods.

Rufous Hummingbirds are very aggressive, they have been known to attack their own species and other hummingbird species.

Both males and females are aggressive and will fight one another for food and territorial resources.

These birds have the widest range across Oregon but can still only be seen in the state during their breeding seasons.

There have been sightings of this bird in the south of the state during its migratory period but it has been most commonly recorded nesting in the north west of the state. Both males and females have these colours of copper, but they are much duller on the females in comparison to the males.

These birds like to nest in more open spaces and are most commonly seen in coastal areas.

During the breeding season, males will pick a single perch from which they will perform their courtship displays for the females.

As with most other hummingbirds, males will mate with multiple females and the pairs do not stay together, females will take care of the young on their own.

These migratory birds rarely stay in one place for long and can only be seen in Oregon during their migratory periods.

They have a very small range and have usually been sighted in the south west of the state. Both males and females have striking white bellies, but the males are more identifiable due to the scattered purple feathers that cover their plumage.

These hummingbirds will try to make their nests in areas of high elevation and are commonly seen in open woodland areas and also in meadows.

Like many other hummingbird species, males are very territorial and will usually have a single perch from which they will defend their territory and also perform their courtship displays.

To court a female, males will put on a shuttle display which involves hovering by the females and making their flapping wings sound like bees buzzing.

These hummingbirds have been seen in Oregon during both their breeding and migratory seasons.

Their range extends across most of the state and they are usually sighted when they have settled for breeding.

Most of the recorded sightings of this bird have been in the central areas of the state and they are more often found in the northern half than the southern half of the state.